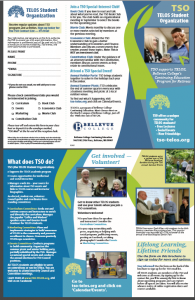 TSO stands for the “TELOS Student Organization” and is made up of the students who take the TELOS courses. All TELOS students are automatically members of the TSO but vary in their level of activity and participation.

The two main functions of TSO are to offer the TELOS students further opportunities for enrichment and interaction with one another, and to provide assistance to the TELOS program. The opportunities for enrichment come through the arrangement of extra speakers at TSO Events, and interaction occurs at TSO Clubs and Social Activities. Assistance to the TELOS program comes through the work of the TSO Council and Committees.

The TELOS Student Organization (TSO) is the representative body for students enrolled in courses of the TELOS Program within the Division of Continuing Education at Bellevue College. Also, as an entity within the Office of Student Programs of the College, and similar to several other student programs within this Office, it functions as a co-curricular organization, thereby providing input to the TELOS Program regarding the academic learning experience of TELOS students. Accordingly, it organizes and implements activities both on-and-off campus of interest to TELOS students and provides outreach, primarily to retirees in the greater Eastside King County community.

Our vision is to create an active and vibrant learning environment, which promotes and nurtures a continuing college level educational experience for our participants.

Since its inception in 1976, the TELOS educational program for retirees was supported by the efforts of a dedicated team of volunteers known as the TELOS Advisory Guild, or TAG. Although they held no governing, fiduciary, or policy-making power, its members assisted in curriculum development, instructor recruitment, and soliciting student preferences. The group also organized regular social activities, including a Winter Holiday party and a Summer BBQ potluck in August, and did fundraising to advance the mission of TELOS: supporting an active lifestyle among retirees. The TAG was instrumental in making TELOS the successful program it has become.

Over time, it became clear that this group of dedicated volunteers needed to become an organization officially sanctioned by Bellevue College. By combining the volunteers’ objectives with the student program structure used by the college, a creative resolution of the group’s unofficial status was found. On July 9, 2013, after the approval of its TSO Student Program Application by both Bellevue College Dean of Continuing Education and the Bellevue College Assistant Dean of Student Programs, the TELOS Student Organization, or TSO, became an official student program and the first such program for the Division of Continuing Education.  The newness of this affiliation brought with it a learning curve for both BC-CE and for the TSO.

Many planning meetings were held from July through October 2013. Official TSO elections took place in November and the first TSO Council meeting was held in December 2013. The second TSO Council assumed its responsibilities on July 1, 2014, the third on July 1, 2015, the fourth on July 1st, 2016, and so on, leading to the current Council and Committees.